The World As I See It

They say it is smart to kill two birds with one stone. In obedience to this advice, the “walking around spirit” directed a trip from Berlin to Brussels; a trip made possible by the EU’s Schengen area policy. So off we went to the capital of Belgium, and effectively the capital of the European Union. I hold Angela Merkel and Berlin in high regard, but I must confess that “B is for Brussels”.

Just as in the flight from London to Berlin, the Berlin to Brussels flight was shared unequally between dozing and taking pictures through the window whenever the prince of sleep gave me some off time. On reaching Brussels Airport, the number of soldiers moving around with determined rifles reminded Abimbola and I that this was a city forced to sleep with two eyes open after the terror attacks in Brussels. Before finding a link to our hotel, I had to fix my mobile data nightmare.

During my earlier trip to the Netherlands, I could use my prepaid plan for calls and text messages and only needed a £5 top-up to get 500MB of roaming data. This month, the EU’s new roaming rule came into place requiring network providers to allow subscribers to use their home plans across EU countries. However, unlike several other network providers, my provider has turned to be the Shylock seeking a pound of its customers’ flesh. I suddenly realised my prepaid plan was useless outside the UK and I would be charged for all calls I make despite having a thousand minutes on my home plan. When I tried roaming and got charged about £2.5 for mere 21MB, I knew getting another SIM was the only way forward. Thanks to Lycamobile, I had to shell out an annoying €15 to get an Orange SIM with 4GB of data; an investment that later turned out to be worth every cent.

The whole of the first day was spent inside the hotel recuperating from the missed hours of sleep. If anyone ever tells you to cheat nature, tell that person that nature never forgets; it would always come for its due. The next day, we set out for Central Brussels, beginning from the finishing line of a marathon that was holding in the city. It was funny to see some runners practically crawling until they came near the finishing line, then suddenly getting explosive energy to run across the finish line to the waiting energy drinks. As we continued walking, we came across a Bowling arena and hopped in for a game of bowling. For a first timer to Bowling, I didn’t do badly, but then losing was guaranteed.

From there, we continued walking across Brussels in search of the famous Manneken Pis. Before getting there, we reached the Grote Markt, the equivalent of a market square. For a hot Sunday afternoon, the square was brimming with tourists taking pictures everywhere. Leaving the Grote Markt, we reached the place of the famous pissing child, a sculpture famous enough to have full scale replicas in several shops. 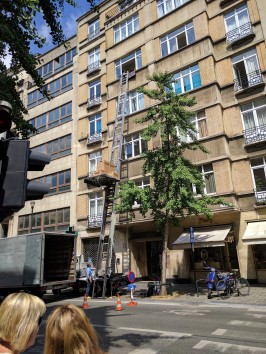 Who needs stairs to move luggage?

All hail the king!

At the Grote Markt

One of the imposing cathedrals in Brussels

Block a road…for the love of art

Who said tanning is only for white-skinned people?

At this point, the overflowing fuel tank in our legs requested that we burn off some of the excess energy. Acquiescing to this request, we went on a long walk in search of the EU’s Parliament Building. The Parlamentarium is one of three seats of the EU’s legislative arm and runs an exhibition open to the public. On reaching the building, our first act was to take pictures in an enclosure that allowed selection of a preferred background. The featured image for this article was taken there. Thereafter, we went through the security checkpoint, similar to airport security checks and then went to drop whatever could not fit into a pocket into an electronic safe. Then the tour began.

Thanks to the multitude of languages spoken in the EU, most signs and descriptions were written in all the national languages of member countries, and the staff in the building are multilingual to ensure visitors get addressed in their own native language. We were given an electronic audio-visual guide to allow interaction with the different exhibitions housed in the building. The exhibitions basically recount the history of the EU, key events beginning with copies of the original documents that formed the EU. By the time we left the building at its 6pm closing time, we were famished and went in search of food we did not know but enjoyed, before heading back to the hotel.

The next day, we checked out and moved from Diegem to Central Brussels. Despite taking in high calorific fuel, this time we were wise enough to take public transportation around. At the Atomium, we were wowed when we learned the imposing structure had been open to the public since 1958. Inside the Atomium, we rode in what is acclaimed as one of the EU’s fastest elevators to the top sphere 90 metres above the ground. After taking in the panoramic view of the city offered by this sphere, we continued to the other open spheres. After the tour, we came down to the embracing arms of four pictures and two customised keyholders made using pictures that had been taken when we first entered the structure. The Belgian’s business sense was demonstrated in their effortless ability to get us to pay €30 for souvenirs we had not planned for but just could not leave behind.

A game of pool before checking out 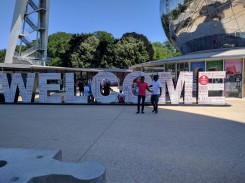 The Atomium…elevator ride to the top 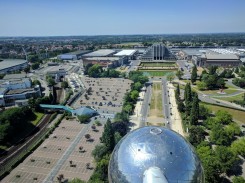 The Atomium…view from the top sphere

The Atomium…view from the top sphere 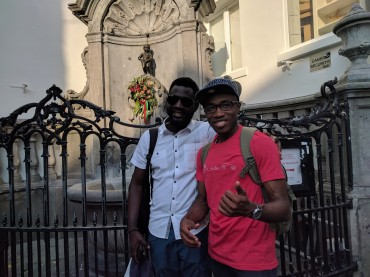 Back to the Manneken Pis | No covering cloth this time 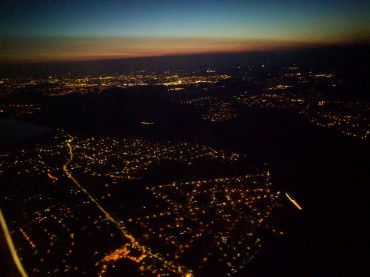 The Return | Berlin at Night

It was now time to return to the Brusssels Airport for our return flight to Berlin, but not before returning to the Grote Markt we had visited the previous day. After revisiting the Manneken Pis and indulging in some Belgian chocolate, we got on a train en route to the airport. The day ended with us falling victim of a classic tourist mistake—buying train tickets for the wrong journey. Luckily, the official at the airport understood it was an honest mistake and only made us pay for the correct train ticket before going through the airport’s gates. Just after midnight, we returned home in Berlin, with our bodies reminding us that after a hectic day of touring comes a long sleep.

PS. On my return to England, I learned of an unsuccessful bomb attack at the Brussels Central Station earlier that day. Thankfully, the Belgian soldiers eliminated the terrorist.