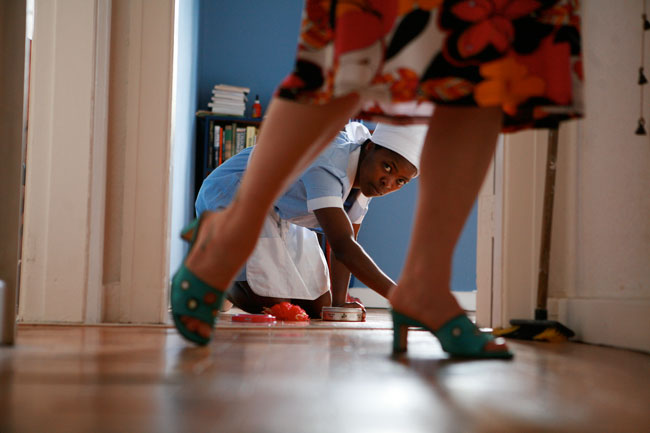 Lucius Seneca’s assertion that “All cruelty springs from weakness” may seem true and untrue at the same time. On one hand, we may be inclined to accept the quote if the “weakness” is physical or intellectual, and so leads to overcompensation. “Weakness” in terms of “weak morality” may also count. However, how would Seneca’s quote hold water if the oppressor is neither physically nor intellectually weak, and even moves with an air of moral superiority? This is the state in which a good number of Nigerians find themselves.

A few weeks back, an American journalist named Alex Tizon had a lengthy article published. In “My Family’s Slave”, Alex wrote about Lola, a domestic servant who served his family for a mind-blowing fifty-six years. Scratch that. He wrote about Lola, a long-term domestic slave for his family. From his native Philippines, Lola was taken along to the US when his family emigrated there, and continued her lifetime of servitude. Expectedly, the story elicited heated responses from the lords of moral cyberspace, with many persons shaming Alex for not speaking out until both he and Lola were dead. Instead of focusing on the details of this tale, let me bring it home to Nigeria.

In Nigeria, the notion of “house helps” is very common. “House help” is even being friendly, as the more popular term is “house girl” or “house boy”, depending on the involved gender. While some may think you need to attain some level of opulence or social status to have a house help, it is not so. All you need is to be at least a little “higher” than your potential house-help in terms of economic power. You see, while some may argue that the society is basically split into the “haves and have-nots”, there is a wide spectrum within each classification. This allows a family in say “level two” to recruit a house-help from a family in “level one”.

Many of these domestic servants are minors who should ordinarily be protected by the Child’s Rights Act. However, like most other things in Nigeria, everything is complex, not as simple as it sounds. For one, in a place like northern Nigeria, many states have not domesticated the national Act, so the law does not apply in those domains. Then, if you move towards the south, even in states where the Act has been domesticated, enforcement is blotchy. How do you enforce a law against child labour if the government cannot guarantee the wellbeing of Nigerian children? Effectively, endemic poverty makes enforcing this kind of rights’ protection impractical or even impossible.

In a society where many families cannot afford to take good care of their children, some parents turn to relatives or strangers seeking a domestic servant or willing to accept their child. We may argue all we want about reproductive responsibility and cutting coats according to our fabric, but for now, at least for now, with endemic poverty, this inability to fund childcare keeps the house-help industry running. While some families give out their children with the expectation that some money would accrue from their servitude, some others simply give out their children for a “better” family to train them. Many times, these families are gifted a rude awakening when they discover their expectations are cut short.

Considering the economic situation in Nigeria, I cannot pragmatically say that having house-helps—whether minors or adults—should be banned. In my family, we had house helps for much of my growing ages, so I know that for many families and individuals, serving in a good household is like a lifesaver. The problem is when domestic servants are exploited or tricked into servitude, and this is where I have issues with the Nigerians ridiculing Alex Tizon on Twitter. I can bet that many of those persons ridiculing him lived in families where if they had a domestic servant or even a less-privileged relative living with them, that person was treated like a third-class citizen. I have skipped second-class because for many domestic servants, even aspiring to be treated as second-class is a bridge too far. That class is reserved for some guests of the families.

Some persons recruit domestic helps with the promise to put them through primary and secondary school. However, the moment they leave the “village” for the “city”, that promise becomes as useful as the burnt rice at the bottom of a pot. While their own children go to school, their servants would have a plethora of chores to keep them fatigued all through the day. Even public schools that are nominally free would not see the front lights of these servants. Some others would agree on a monthly stipend, but would renege on that agreement, turning their servants to unpaid slaves. Each month, one reason or the other would be given to avoid paying their servants for the work they do. At the end of the year, when these servants are to travel back home for their Christmas holidays (for those allowed to travel), they go to their families empty-handed. For those who are Christians, I find it annoying that they would bring their domestic servants to church, not to participate in the church service, but to watch over their children, so that they (the parents) can focus on the service as if the Jesus they believe in did not also die for their servants.

Topping the list of atrocities is the violence many domestic servants receive as reward for their hard labour. In a country where military and paramilitary agents maltreat civilians, people hardly miss a heartbeat over something as “simple” as a house-help being beaten by “oga” or “madam”. Some parents would never lay their hands on their own children, but would beat their domestic servants as if they were lesser humans. When I see the social media debate about domestic violence in terms of husbands/wives or boyfriends/girlfriends, I wonder why there is hardly any talk about the full range of domestic violence. By not looking at the full range of violence that occurs in homes, we miss the basic driver, which is that a little power differential makes humans behave in despicable ways. Maybe if we address the culture of abusing power privileges, then, domestic servants, wives, children, and husbands would not be subjected to domestic violence.

Going through this article, I realise I have touched on several points without fully delving inside them. I decided to write this article during a discussion with a friend after we both read Alex’s tale. However, I did not come around to penning it until now, and in the intervening weeks, different thoughts have crossed my mind. If you would take anything from reading this composition, it should be a resolve not to abuse power in any way. The Lolas of Alex Tizon’s story would continue to exist in Nigeria until poverty is greatly diminished. While we wait for that utopia, we can at least be better persons to those with less fortune than what our privilege has endowed on us.