The World As I See It

The previous post covered my journey to the Netherlands and my tour of Delft with Fabian the interesting storyteller. After Delft, the next port of call was Amsterdam, one of the most popular cities in the world, and a busy transport hub for many international flights. One of my hosts has nicely ordered me to write an article for each city I get to visit in this country. I do hope I can meet this demand. Here is Amsterdam from the eyes of an entranced stranger.
My hosts, being students at TU Delft, have the daytime for academic work. Late afternoon is when the patrolling begins. We set off for the Delft train station to catch a train to Amsterdam. Before then, I got to learn of a way people in the Netherlands get tickets at cheaper prices by buying in groups. Once again, I got to sit behind Femi, as he cycled his bike alongside Briggs, with both guys doing their best to remind me that being unable to cycle is a terrible sin needing blood atonement.
We arrived at Amsterdam Central Station after an hour on the train. This time there was no Fabian to dazzle us with tales of Amsterdam. We had to make do with mobile maps and Google, best companions of the 21st century tourist, plus the good old-fashioned means of asking physical human beings for directions.
Just across the central station, several shops line the street. As we walked along the street, we came across a group queueing to buy chips. A sign in front of the store proclaimed this store as the home of Holland’s best fries. That was enough motivation for us to join the queue. If you want to be a tourist, you should be willing to shut down some parts of your brain and swallow exaggerated tales. Later that night, I would eat crepes, a thin pancake sprinkled with chocolate and nutella. After getting our golden-brown chips, we continued down the road.
Just up ahead was the Royal Palace of the Netherlands, one of the official palaces in this kingdom. The square in front of it brimmed with tourists taking pictures with every conceivable kind of camera. From the palace, we continued on our aimless walk around the beautiful city. As we walked through the city, taking pictures at every street corner, we lost track of time. To put this more correctly, time loses value on the streets of Amsterdam.
Thanks to a chance phone call to a resident of Amsterdam, our aimless but enchanted walk was redirected towards the Festival of Light. The festival of light is a series of light-centric artworks around the city of Amsterdam. Although, we had a snapshot of a map to each of the art installations, the best advice we got from an elderly couple was “follow the red lights”. Each street on the festival route was line with red beacons, and we spent the next maybe two hours following the beacons from one attraction to another. 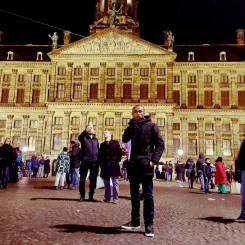 The artworks displayed in the festival centre around biomimicry, the imitation of nature. Using sensors, many of the artworks could interact with human touch or merely the closeness of a human being. From trees that show colourful lights when hugged, to eyeballs that track movement, to walls that transmit light in a way mimicking nerves, the different art pieces kept tourists glued to them. 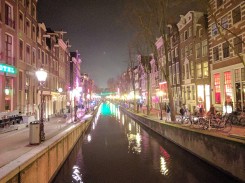 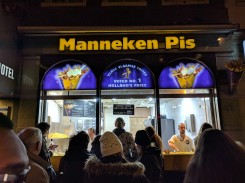 The making of Crepes

We also went through Rembrandt Square where we took pictures with the statutes in the square while a band of musicians sang with their guitars. I got to know that marijuana is legal in the Netherlands, and is sold in “Coffee shops”. While taking pictures in the square, we were joined by an Italian couple, who were inspired by weed and decided to put a lighted joint between the fingers of one of the sculpted soldiers, and smoke through the fingers, while taking pictures. Finally, we had to see the famously infamous tourist attraction in Amsterdam that lies very close to the central station. The visit was strictly for academic purposes. Those that know the place know it.

It was almost midnight when we returned to our launch pad in Delft. While on the train, I remembered my upcoming assignment deadlines and exam. One cannot even enjoy Christmas in peace. Final verdict about Amsterdam? It’s a great, beautiful city. Just ensure you don’t lose your bearings in the place of fifty euros. Briggs, I’ve paid my dues. It’s time for my books.